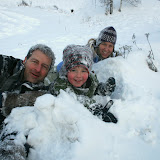 We bombed passing cars with snowballs.

We will still keep our blgospot site up for a while, but will only make edits to darbyfamily,org. It’s not complete yet, but you can see some basic news and pictures. Let us know what you think.. what you like, what you think we could do differently. Hope you all have a wonderful 2010!

Global Warming has ended!Quick! Somebody ring Obama and the folks in Copenhagen! It looks like global warming has ended.  At least it appears so for us up in the north of Sweden. I’ve been hoping for a really cold and snowy Christmas from many years. It seems it usually either rains or sunshines, but it hardly ever snows. Finally, things have changed. Veronica’s dad even read recently that some scientists are suggesting we may be entering a new ice age. Well, isn’t that just ironic? Until it does, we’ll be enjoying the wintery days of the north. So far, we’ve built snow shelters, cross-country skied and even been to the indoor water slides! The saunas here rock! The roads are icy, but we drive slower to compensate.

These first few posts are simply me trying to see how our new website will look. I basically sit here and add some text and pics to see how it will look on our pages. So, if this is too boring for you, well.. it’s obvious, I guess, that you can simply click away from this page. But, do come back, y’hear? these pages will soon be filled with awesome stuff. We hope.. right?

Okay, so it snowed every day for the past three or four days. And I love it! because we are in northern Sweden. It’s dark but it is very Christmasy.. did I spell it right? I built a snow fort for Rasmus nad Lucas today. Rasmus dug it but Lucas was only happy to be outside. It’s kind of wrong how much he doesn’t mind the blasting -15 degree celcius, cold air. What a man. Must be a Darby 🙂

Lydia Callsen, my Media Co-worker from Germany just left for home this week, but not without leaving a positive impression on Uddevalla, our closest neighbouring city. I helped Lydia plan and pull off a photo exhibit about the Life in Uddevalla. We often hear that there is nothing good in Udevalla, that it is boring and dead. Do you know a town like that? So I iencouraged Lydia to do something about it.

She, along with myself and another photographer went around Uddevalla several times and simply took photos of people and places. The result was a photo exhibit which showed during Uddevalla’s Fjordfestival. The exhibit was held in a small basement café called Saronhuest which is owned and run by the churches of the city. We didn’t attract large crowds, but many who came really enjoyed the photos. We had many opportunities to simply get to know the people of Uddevalla during our photo shoots. It opened my eyes to the possibilities of reaching out to a city in more ways than traditional Friday night evangelism. And the conversations seemed more real to me. I think I’ll do more stuff like this!

Our kitchen was a tent, our backyard was the Moravian forest and our friends were 200 or so wonderful missionaries from throughout Europe.. and beyond! There’s something magical about this mission we work with. And Veronica, the boys and I got to sleep in a water castle (What the heck is a water castle?) in the small German town just a hop, skip and jump from Poland and spitting distance from the Czeck Republic, if the wind conditions are right. The town is called Herrnhut, known to be the birthplace of the Moravian 24/7 prayer movement and modern missions movement. Okay, so we had had to share a room with four other singles because the heaters didn’t work in the tents. But hey! as our spinning instructor used to tell us, “You can do anything for three minutes!” In this case it was three weeks. The event was the YWAM DNA Infusion, a chance to hang out with some of our mission’s founders and remember why we do what we do. photo – This was our living room for three weeks. Not much privacy there.

In a nutshell Youth With A Mission is a large, messy, sometimes unorganised bunch of people who love to ask, “Is that really you Lord?” and then obey him.. and get this, even if they fail! (in man’s eyes). In my opinion, many YWAMers resemble Leonard Dober, a young citizen of Herrnhut who left his home to became a missionary to the slaves in the Carribean in 1732. I bet if Leonard Dober were alive today he’d want to do a Discipleship Training School in YWAM. Do you know why I think so? Because YWAM believes in young people, even when it’s a sure bet that young people will make mistakes, and we’re left to help them clean up the mess. One of my biggest take-aways from the event is when a long-time veteran of our mission said, “Why would you expect an eighteen-year-old team member not to make mistakes when you made those same mistaks when you were eighteen?” This is one of YWAMs values, to champion young people. That’s not to say we won’t challenge them to raise the bar. It just means we’ll set it a little lower for them until they get the hang of it. But, the thing that really blows my mind is that our leaders who have stayed in this mission for more than 30 or 40 years still allow each other to make mistakes and ask forgiveness when they themselves mess up. Photo – Darlene summed it up when she said, “To the accountant in YWAM I say this, ‘If you didn’t have the visionary, there wouldn’t be any money for you to count.’ And to the visionary I say this, ‘Bring back all of your receipts so the accountant can do her job!'”

I’m so glad I attended this event in Herrnhut, Germany. I’ve come back home with a renewed passion to champion the young people who come to do our schools and perhaps continue on in missions either here in Sweden, or beyond. And now, I challenge you to do the same. And I invite any young person (or not so young person 🙂 to take the step of faith and give at least a year to God in missions. Come do a DTS here in Sweden and be “ruined for the ordinary”. And make sure to check out our latest videos I just posted on our YWAM YouTube page.

One of my photos ended up in a Danish newspaper recently. See if you can spot it. I will give you a hint. It is a photo of someone who I work with here at Restenäs.
Go to this link to see the web newspaper.
http://www.e-pages.dk/nibeavis/3/
Rob

Today I had a few friends over for an early birthday party. I’ll be 45 years old on Tuesday. I am so thankful for my beautiful wife and my two handsome boys! God has been so good to me. I posted some new videos on YouTube the other day, from our trip in the USA. In case you didn’t know it, you can go to YouTube and watch them. It’s as simple and going to this web address www.youtube.com/chabarang That’s it! And you can also view my latest photos I put on www.Flickr.com/chabarang Don’t be shy! Go ahead, click on the link if you have a few minutes. Our videos are generally quite short, and my photos are not bad! IMHO Make sure to click on the “Show info” text n the top right if you want to read a description of the photos.